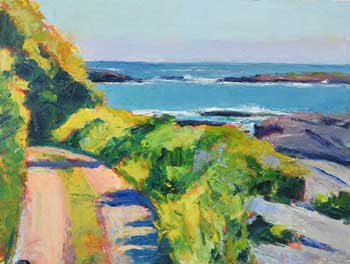 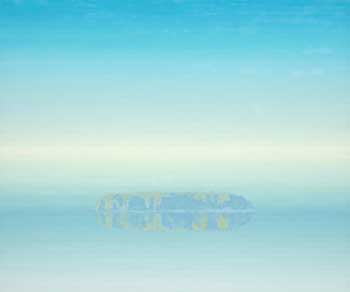 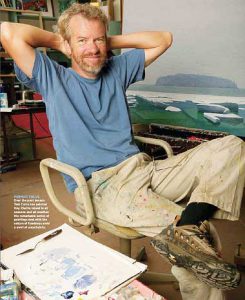 As a plein air painter, I immerse myself in the landscape to explore the relationships between stillness and flux. What we call a “place” is a paradox—it is not fixed but always changing: the light shifts from moment to moment, water is never still, clouds come and go.

For the past 22 years, I have painted the landscape around my home in Maine, including a small island just offshore that has become the subject of a series of more than 60 paintings, many of which are collected in the book Island, published in 2012. In this series, I paint the interplay of light, island, sky and water as metaphor and meditation on place and time and the dance between what we perceive as eternal and ephemeral.

I am drawn to paint both the raw, wild places and the small villages and harbors on the peninsula where I live—working outdoors where I can be in direct contact with the clear, searing light or the dense fog, the heat of the sun or a frigid wind, the sounds of crickets or distant drone of a fishing boat, the smell of salt. I seek to create a powerful and intimate sense—and experience—of these places using layers of saturated color and compositions distilled to bold, elemental forms.

In my work I seek to express that we are not mere observers of landscape, but also participants. I want to encourage the viewer to engage with landscape not as a passive backdrop of scenery, place names, or historic events, but as alive, wild, muscular, and ultimately unknowable—layered with history, yes, but also breathing, ever-changing and seamless. 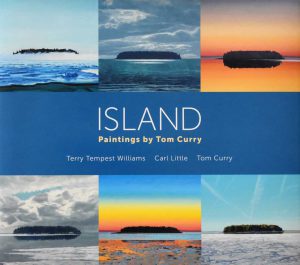 When artist Tom Curry first moved to Maine, his house overlooked a small, uninhabited island in Eggemoggin Reach. One day, while rowing across to the island, his boyhood fear of water came crashing down on him. So he decided to explore his fear of water head-on, and began painting the island “as a way to delve into my own darkness and seek a way back to the surface.” That series of paintings, capturing the island in all lights and weathers and moods, forms the basis of this book. But the whole is so much more than the sum of its pieces. These paintings represent an ongoing narrative: “island as escape and entrapment, island as longing and memory, island as sanctuary, island as self in a sea of turmoil.” Curry’s island speaks to us of our own fears and our own spiritual connections with the natural world. The paintings are accompanied by essays by Terry Tempest Williams, exploring Curry’s spirit of place, and Carl Little, establishing Curry’s art within the field of landscape painting.

Terry Tempest Williams is the award-winning author of Finding Beauty in a Broken World, The Open Space of Democracy, An Unspoken Hunger, Leap, and Red: Passion and Patience in the Desert. She lives in Castle Valley, Utah but makes annual trips to Maine. She has been Tom Curry’s friend for many years.

A widely recognized critic of New England art, Carl Little has published more than sixteen books and numerous articles in such journals as Art New England, Art in America, and Ornament.

Tom Curry holds degrees from the University of Massachusetts and the Rhode Island School of Design. He has taught and conducted workshops at Wellesley College, Rhode Island School of Design, the Round Top Center for the Arts, the Danforth Museum School, and the Wentworth Institute. His paintings have been included in such publications as Island Journal, the Boston Globe, The New Yorker magazine, Down East, and on the cover of the book East Hope (Penguin Books, 2009). His work is in the collections of the Delaware Art Museum, the Wheaton College Art Museum, the U.S. State Department, Federal Reserve Bank, Boston Red Sox, Putnam Investments, Fidelity Investments, and General Electric. His muse, Chatto Island, of which he has produced nearly fifty paintings and pastels, represents a significant portion of his creative output. 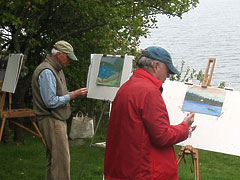 This year’s workshop is three days.

Lodging and a full meal plan are available with the Residential Package for an additional cost.

“One of Tom’s strength’s as a teacher is helping the student develop clarity around their painting goals. During the workshop , he guides each student through set up, composition, light, value, and color and offers helpful suggestions. Every time I paint with Tom I learn something new. It’s a great, helpful, and fun experience.”
Liz Armstrong, Maine artist 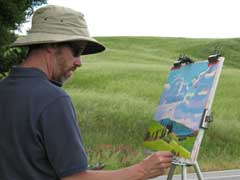 Tom Curry, a graduate of the Rhode Island School of Design and an experienced teacher, conducts two-day pastel painting workshops on dramatic coastline locations. Each day begins with a demonstration giving each student a refresher in basic drawing principles and a quick overview of color theory. Because of the personal instruction, Tom invites all skill levels to participate. The class atmosphere is collegial and supports you in developing your skills and artistic vison.

“Tom introduced the materials, color concepts and drawing process in detail so i was able to make successful drawings despite having never used soft pastels before. A few step-by-step lessons in how to build color on a drawing kept the process from becoming overwhelming to a beginner.His enthusiasm for this medium and passion for the local landscape was infectious. These days I draw and paint using tips Tom generously provided for tinting grounds and creating more dynamic compositions. My artwork is shown regularly in group shows and a few pieces have sold”. Gioia Consoli, NJ 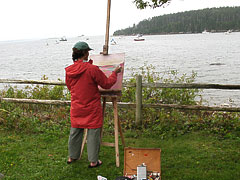 “Tom will take you from wherever you are and help you get much better. He will help you see in a different way, and teach you techniques that fit your current stage of development as a painter, while respecting your approach and goals. He is endlessly patient.”
Marc Tucker, Washington, DC

“My son Matt and I joined Tom Curry’s Wooden Boat painting workshop in the summer of 2011. Matt had been painting in oils for some time, knew quite a lot and was looking to take the next step. I had never held a brush in my hand. After only a week, I was painting pictures that I was not ashamed to put up on my wall in my house, and Matt’s techniques, use of color and facility with composition were all visibly improved. We were both delighted!”

Fill out my online form.